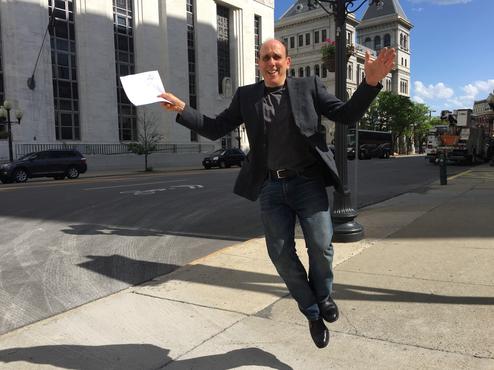 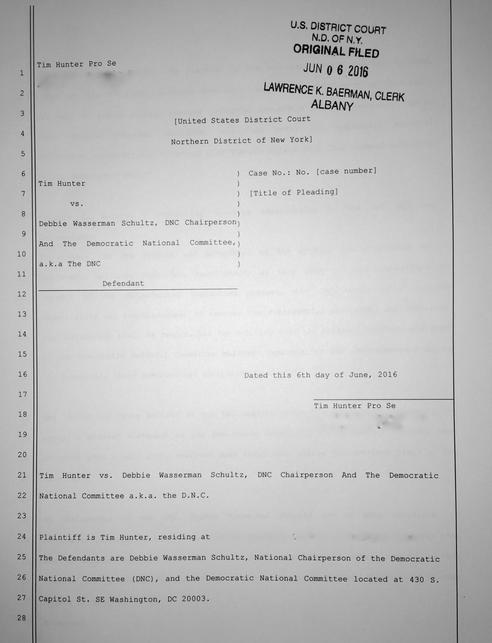 I HAVE NOT HAD THE HEART TO CHANGE THIS, BUT...-IT IS WHAT IT IS

AN UPDATE: In October, I allowed the DNC to dismiss the lawsuit. The primary aim of the suit was to reveal the BIAS being committed by Debbie and the DNC. Wikileaks took care of that. Still find it hard to believe that it did not make a difference at the DNC Convention, but....you see where it left us!

WE ARE ALL IN THIS TOGETHER

PLEASE FEEL FREE TO READ THIS TIME CAPSULE FROM JUNE 2016:
Imagine what the race for the Democratic Nomination for President would look like had the DNC not played favorites. Especially raising over 100 million for Hillary! I want acknowledgement AND answers, so I filed suit in Federal Court.

Tim Hunter vs. Debbie Wasserman Schultz, DNC Chairperson And The Democratic National Committee a.k.a. the D.N.C.

The “About Our Party section of the DNC websitehttps://www.democrats.org/about/our-party, a mission statement of the Democratic Party says “this country succeeds when everyone gets a fair shot, everyone does their fair share, and everyone plays by the same rules.

As Chairperson of the DNC, Debbie Wasserman Schultz has on many occasions, to newspaper and magazine reporters, and in media interviews, affirmed declaratively that she as Chairperson, and the DNC have and will continue to remain neutral in the contest for the Democratic nomination sought by Secretary Hillary Clinton and Senator Bernie Sanders.
Examples:

It is the contention of the plaintiff that Chairperson Debbie Wasserman Schultz and the DNC, have willfully ignored custom, precedent, and their own bylaws, acting in a completely partial manner in Secretary Clinton’s favor. The ways may have included, but are not limited to: coordinating efforts in canvassing, polling, conducting caucuses and conventions, supervising election results, renting of office space in Democratic campaign offices, and willfully ignoring violations of election law: specifically allowing politicking within prohibited areas, by Secretary Clinton and her husband, former President William Jefferson Clinton. However, the most tangible, verifiable, and perhaps damaging to the plaintiff has been coordinating with and assisting Secretary Clinton’s campaign to raise funds for that campaign.

The plaintiff has donated to the campaign of Senator Bernie Sanders, on February 10, February 27, March 26, April 15, April 20, May 3, and May 21 of 2016 in the amounts of twenty-seven dollars ($27). For a total of one hundred and eighty nine dollars ($189).
The DNC, through their Political Action Committees, or PACs has raised ten of million of dollars for the Clinton campaign. One example of this is “The Hillary Victory Fund” a PAC, which was announced as a vehicle to benefit down-ticket state level Democratic candidates.
“But less than 1 percent of the $61 million raised by that effort has stayed in the state parties’ coffers, according to a POLITICO analysis of the latest Federal Election Commission filings. The venture, the Hillary Victory Fund, is a so-called joint fundraising committee comprised of Clinton’s presidential campaign, the Democratic National Committee and 32 state party committees. The setup allows Clinton to solicit checks of $350,000 or more from her super-rich supporters at extravagant fundraisers including a dinner at George Clooney’s house and a concert at Radio City Music Hall featuring Katy Perry and Elton John. ….The victory fund has transferred $15.4 million to Clinton’s campaign and $5.7 million to the DNC, which will work closely with Clinton’s campaign if and when she becomes the party’s nominee. And most of the $23.3 million spent directly by the victory fund has gone toward expenses that appear to have directly benefited Clinton’s campaign, including $2.8 million for “salary and overhead” and $8.6 million for web advertising that mostly looks indistinguishable from Clinton campaign ads”
Quoted from
Politico 5/02/16
http://www.politico.com/.../clinton-fundraising-leaves...

Plaintiff has made his seven twenty-seven dollar contributions totaling $189 with the expressed understanding of the historic precedent of DNC neutrality, and the bylaws of the Committee with regard to strict impartiality. Plaintiff’s $189 was damaged by the unfettered torrent of PAC money, and other financial and material assistance, that the DNC provided to help the Clinton campaign.

Plaintiff requests that the DNC be required to:
1: Acknowledge that they have been aiding the Clinton campaign in monetary and non-monetary ways.
2: Be required to have an impartial qualified outside party do a complete accounting of all funds that the DNC has collected and how it was spent.

Furthermore to make the plaintiff whole, The DNC should be required to:
1: Provide equal funds to the Sanders campaign
or
2: Offer to refund plaintiff’s $189 and also give all Sanders supporters a complete refund of their contributions, as they have been mislead about the comparative value of their contributions.
3: Accomplish this before the DNCs nominating process is started July 25, 2016, and if the remedy has not been provided by July 25, 2016, delay the nomination process until transparency can be provided so that the American people, who have a right to know, may understand the true biased nature of this contest, and so that the Democratic delegates may be provided the necessary information to make a completely informed choice on the Democratic Nominee for President of The United States.

The thrill of filing suit against the system!!!